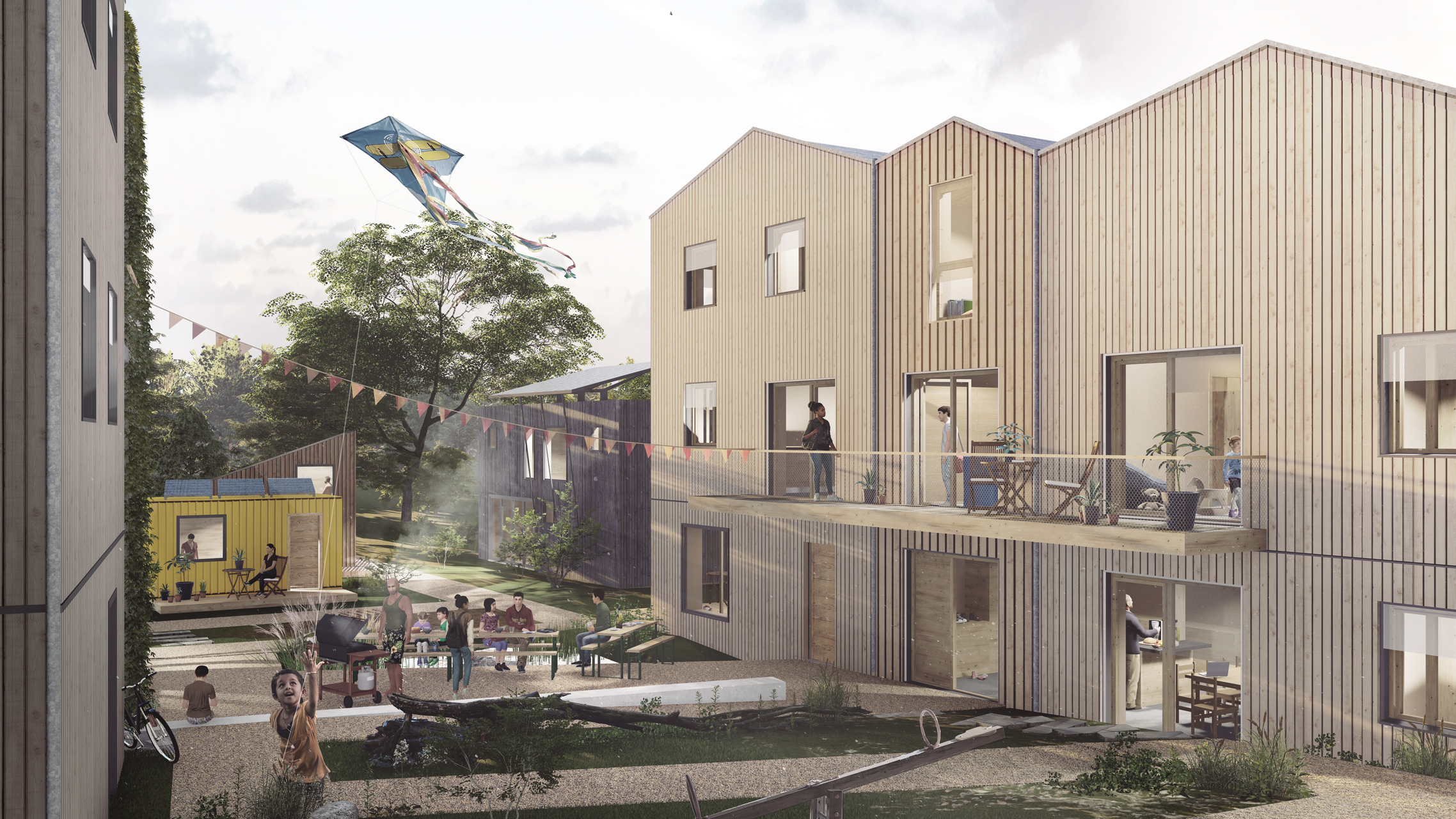 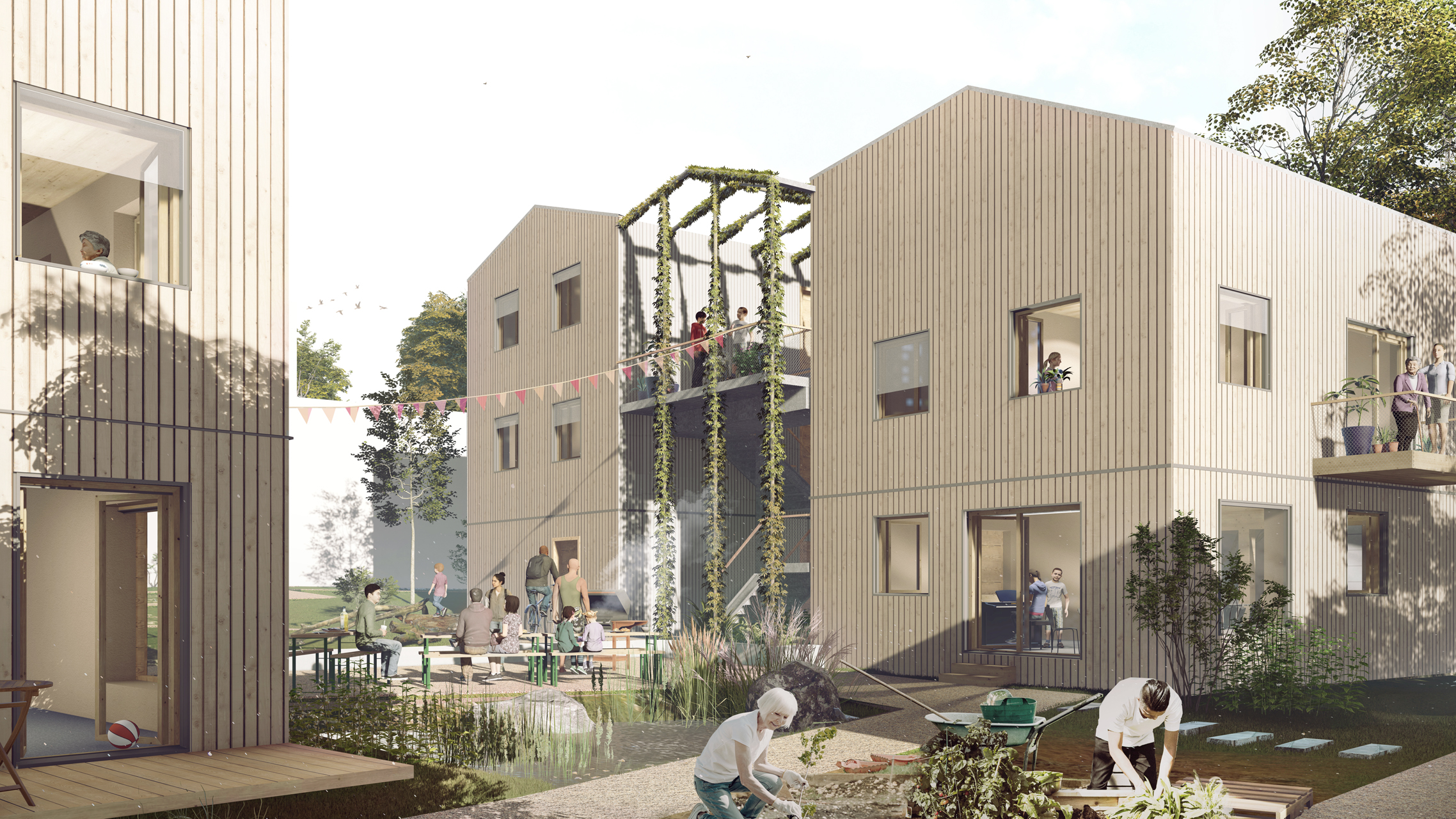 The city of Hannover is actively promoting the creation "Ecovillage", a new neighbourhood for 1,000 people. The emphasis is on high social and ecological standards, which are fundamental for the planning process of all buildings of the quarter. This way it is intended to create both sustainable and affordable rental flats - setting new standards in housing construction in terms of ecology, sustainability and social coexistence.

Concept Partner und Partner architectural studio are building four residential buildings on the Kronsberg. The buildings are grouped around neighbourhood courtyards. A total of 30 flats are being built for different living concepts. A differenciated mix of units is created in the three- or four-unit buildings: It ranges from micro-apartments with approximately 30 square metres to four-room flats for shared living with 70 square metres. The construction is a wooden post-and-beam structure with ceilings made of cross-laminated timber. The roofs are made of solid wood and are claded with PV in-roof systems. For ecological reasons, no cellars are planned; instead, storage rooms are provided in the attic; also the technical installation is located there. In cooperation with the "Concular Material Exchange", recycled building elements from demolition of other structures will be re-used.

Energy New paths are chosen in the Ecovillage: During construction the CO2 production will be minimised, during the operation it is intended to reduce production to zero. Instead, the quarter is pannned to produce an energy surplus. Photovoltaic systems are installed on the buildings of Partner and Partner to supply the neighbourhood with electricity. They are operated by "ecotopia Dienstleistungsgenossenschaft eG". Geothermal energy is used for heating. All buildings have a passive house standard, which means they comply with the regulations of the city of Hanover. Rainwater seepage happens on the property. Separate toilets will reduce the amounts of wastewater. The neighbourhood is banned for private cars, thus its infrastructure is designed for bicycles and car-sharing. In addition it accessible by public transport.

Tiny Living The neighbourhood implements a new concept of living. The creation of different communal spaces, as for example laundry cafés on the ground floors and common courtyards are part of the project. The Ecovillage is run by "Dorfleben ecovillage Hannover eV". The fundamental idea: Privacy should fit into as little space as possible. It is the implementation of Tiny Living as a multi-family house. This leaves larger areas for communal use.

Social and ecological mission The neighbourhood is open for the future, sustainable, communal and affordable, qualifying a part of the Ecovillage to become subsidised rental housing. As an example, the "Villa GanZ Foundation" commissioned one of the buildings; it will provide living space for a total of seven single parents and their children. The Ecovillage is financed by loans, state subsidies and the cooperative's members' own contributions. Overall completion is planned for 2027.

More information on the overall project (and *) at: www.ecovillage-hannover.de